It was the bottom of the ninth and the game was tied. With two outs and ghost runners on first and third I stepped to the plate.  I was no stranger to this situation.  I had played it over and over in my head.  “Wait for the right pitch,” I told myself, as I anxiously approached the plate.
Would it be the fastball?  Maybe the slider?  A hanging curve? Nope, I decided to use a tee : ).  I swung like I would if a piñata full of tootsie rolls was sitting in front of me.  Side note – – – – > My first choice would have been Big League Chew Gum, but nobody ever thought to put that in a piñata did they?
The ball sailed to deep left.  As I rounded first (the sandbox) I saw the ball fly over the left field fence (the garden).  The game was over.  I was a hero.  And you might think that winning the game was the defining moment for me. It wasn’t.  The fact that I hit it with my imaginary girlfriend watching on from the rooftop of our house was even sweeter.
Sweet were the moments such as this during my childhood.  We would play for hours, taking breaks only to hydrate ourselves from the garden hose.  When we finished baseball, we switched to basketball, and then football, and yes our imaginary girlfriends sat atop the roof as we showed them what real men do.
You see, we are all creatures of our imaginations.  We make up games and have great ideas all the time.  Although it saddens me that children now days don’t see a sandbox as a base or a garden hose as a thirst quencher, I’m excited to see what the imaginations of my own children have to offer.  As an educator and father – the greatest gift I can give to children is the freedom to let them explore their own imaginations and creativity.
Even though generational thoughts are quite a bit different from when I was younger – we still need to embrace our children’s ideas and passions.  Just because we built cities in the sandbox, or out of freshly wet snow, does not mean children today are deprived as they build cities via Minecraft.   Things such as Minecraft exist because people were allowed to explore their own creativity.  How many people could have been the best at something, or invent the next big thing – if we would have just supported their ideas?  The possibilities in this world are endless and we need to allow our children the freedom to explore the world through their own minds.
Let’s give our children the gift of exploration.
I may have been the hero that day in my backyard, but my children will be the heroes tomorrow.  Also, (in case you were wondering) I eventually found someone even better than I could have imagined (even though she would rather go shopping than watch me play baseball). 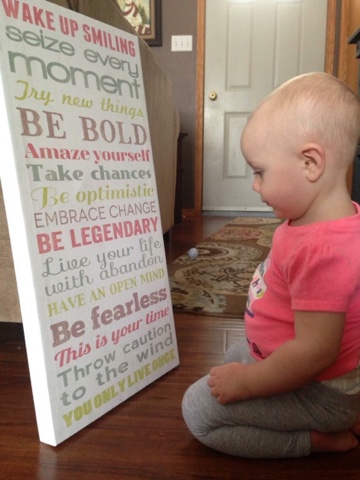